High Times - The Tall Guys in the Perennial Garden

Our garden is full of plants; our garden is full of tall perennials and grasses to be more exact. There was nothing deliberate about it; it just happened and we rather like it. By the end of summer everything is at maximum height, high times indeed.

Much of the height in the garden is provided by grasses. Yes I know they were to the 90’s what conifers were to the 70’s and now of course probably now totally out of fashion: think of them as “retro” if that makes you happy.

The most dramatic and earliest to reach for the sky is Stipa gigantea, the Giant Spanish Oats. Some people tell me theirs won’t flower.  My advice is “do nothing”. Don’t feed, don’t cut back the leaves, don’t water, don’t shade them; just take off the old flower stems in February and comb out any dead leaves. Then stand back and enjoy the glittering display between late May and next February as the flower heads catch the rays of the sinking sun and dance on the breeze. I love the July and August combination of Stipa with the equally tall Veronicastrum Fascination - one of the best bee magnets in our garden. 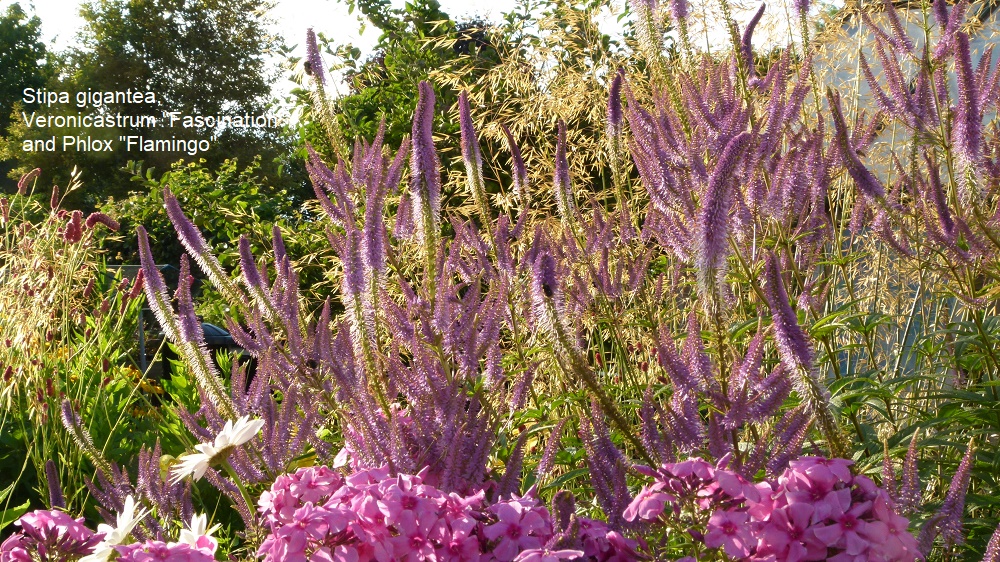 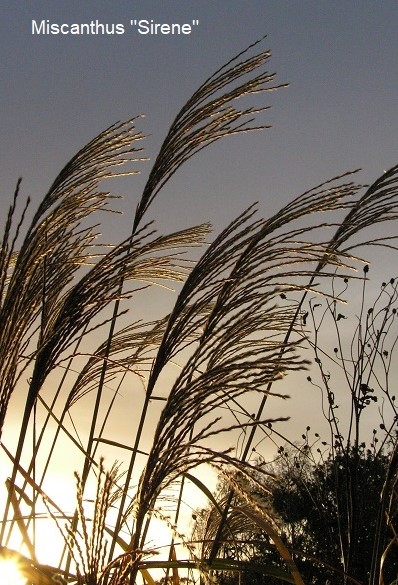 You’ll find plenty of Miscanthus around the garden. I particularly like the gold-banded types. We have Hinjo, Zebrina and Pünktchen in various spots (pun not intended). They all look more or less the same to me and make equally good partners for the sunny daisies like Heleniums, Helianthus and Heliopsis. For me, however Miscanthus come into their own in the evening light as the rays of the dying sun catch the flower heads of "Sirene" which flowers from late summer.

Sometimes overlooked, Molinia (Moor Grass) are putting on their restrained and elegant show at the moment. The tallest of these, "Windspiel" stands, solider-like, to attention but it's the gauzy grace of "Transparent" that steals my heart, reveiling a haze of phlox flowers beyond it. 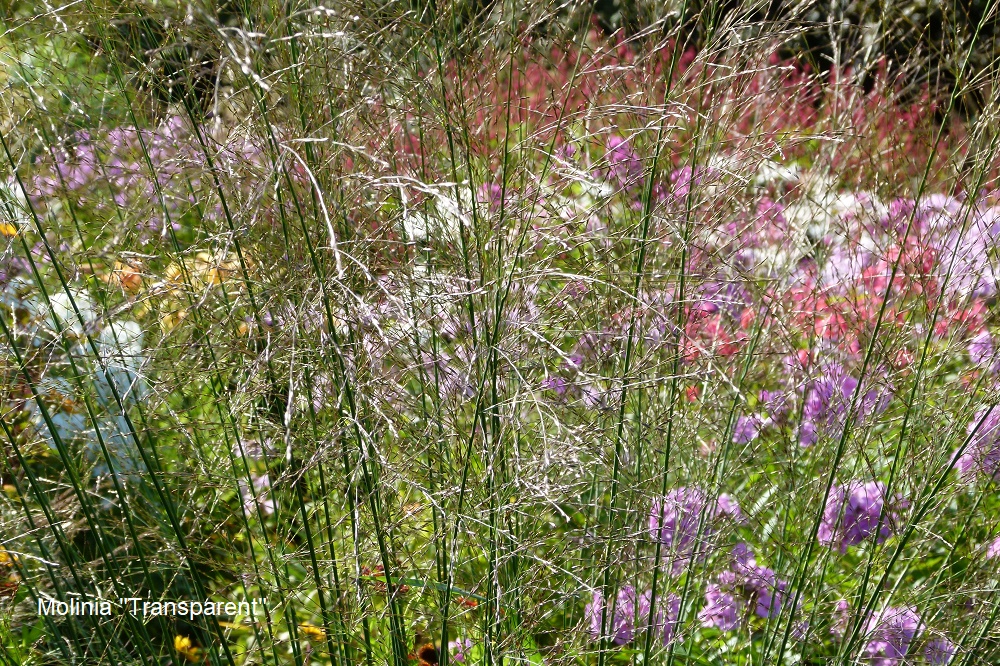 Rudbeckia "Herbstsonne" is head and shoulders above other members of the genus in height and impact. It is self-supporting and those droopy-petaled, lemon yellow flowers are a magnet for butterflies. "Maxima" deserves a mention but is always slug breakfast in our garden. 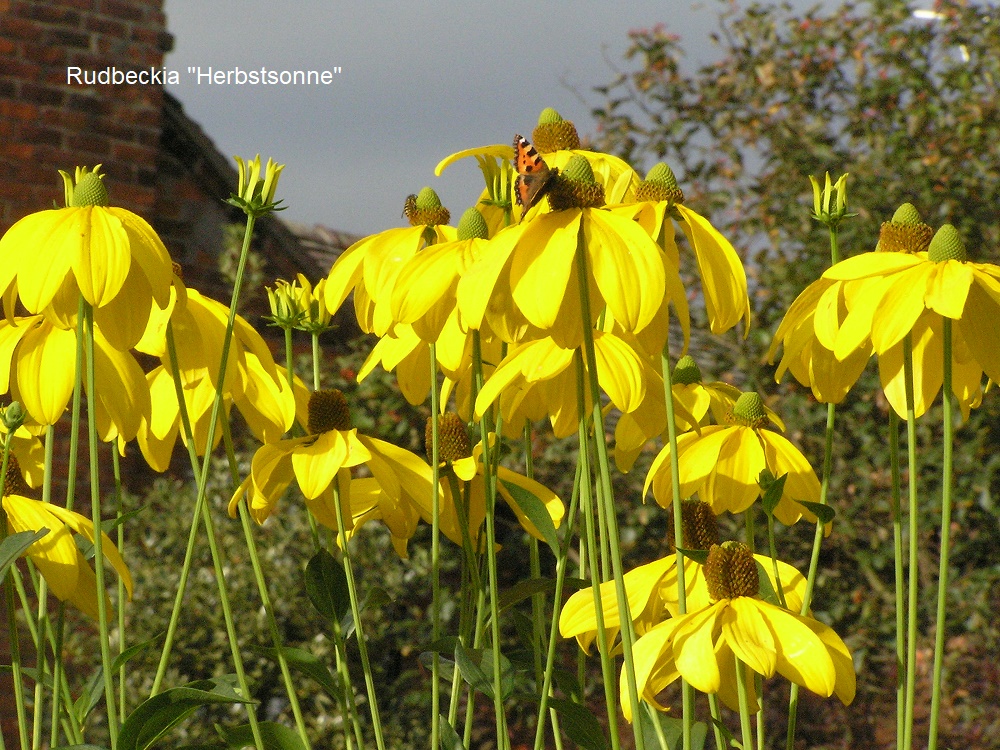 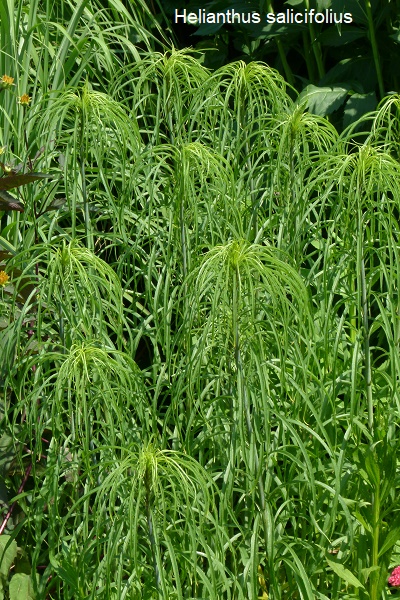 Helianthus are normally vying for the top spot but are a little behind this year. The delicious Lemon Queen with those small but delicately toned flowers that are just starting to stud the 6ft / 180cm stems. Lodden Gold has double deep yellow blooms and Capenoch Star with smile-making, large, anemone-centred blooms. Both rarely exceed 5ft / 150cm tall.

Helianthus salicifolius scores double points as a foliage plant in early summer and its small but plentiful flowers in autumn, by which time it has reached 6 or 7ft / 180-210cm tall. Similar is "Bitter Chocolate" so called for it's chocolate scented flowers. 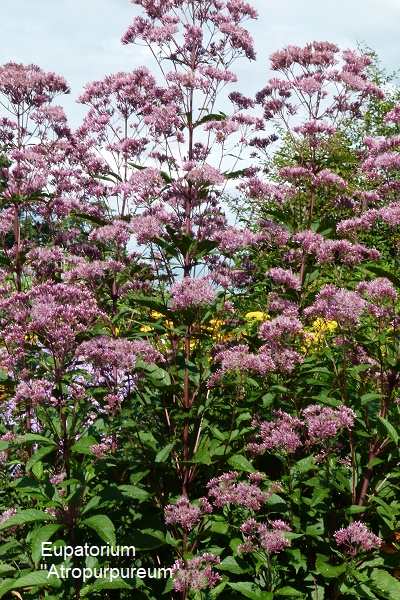 The received wisdom is to plant low at the front, high at the back but sometimes breaking the rules is very worthwhile.  A seedling of the 6-8ft / 180-240cm Eupatorium maculatum Atropurpureum (“Joe Pye Weed”) sprung up at the front corner of one section of our long border and it is clothed from top to bottom with those fluffy pale purple flower heads and dripping with bees and hoverflies. It looks so architectural: a towering column of flower, leaves and those lovely purple stems. 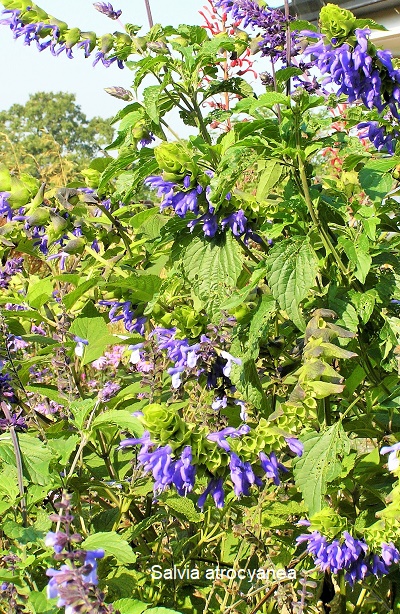 The small, sheltered, south-facing bed beside our garage is crowded with tall guys like the 7ft / 210cm Lobelia tupa, the even taller Salvia atrocyanea with its arching stems and royal blue flowers. 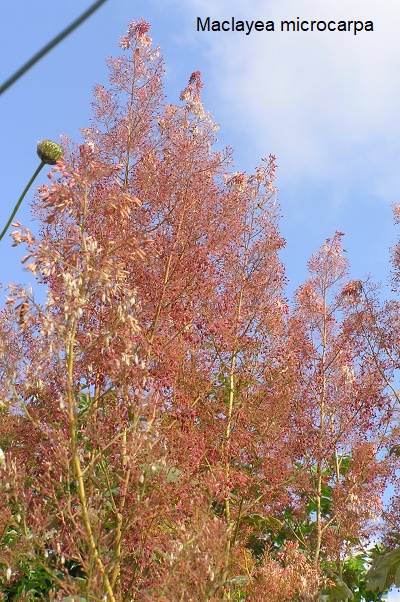 Standing head and shoulders above it all is Maclayea microcarpa – the plume poppy – which will tops out at around 12ft / 360cm and yet it has the pose and grace to remain elegant and not overbearing.

But do high times mean high stakes? Well, being a lazy gardener, I stake only as a last resort and in most cases the plants hold themselves up without help. The only task is shredding those long stems ready for composting at the end of the season!